Allendale FC first visited AS Valognesin the guise of Wimborne Youth Club, in

Pichard brought a team to Wimborne to celebrate our 25 th Anniversary. In

twelve miles to the south. Old friendships renewed and new friends made over

a beer or three before going to our accommodation. Later that evening we all

met at an American Style restaurant in Cherbourg.

gamekeeper scoring the Allendale goal. In the clubhouse that evening we

Bourgiugnon cooked by the French Players.

picnic lunch in the dunes. A typical long and hospitable lunch meant a dash to

the Ferry port to catch the boat home. A weary but happy bunch of travellers

returned to Wimborne on Sunday evening.

Three teams took place on Saturday 27th May 2017 with the following teams: 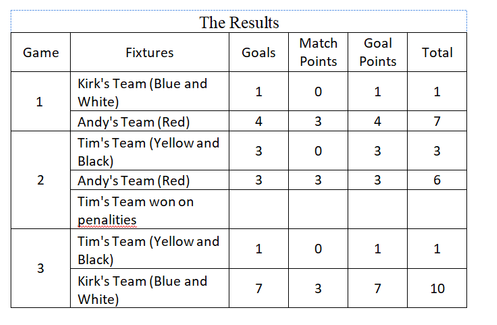 A Gourmet Hog Roast with various salads, dressings and sauces followed by dessert and special cheeseboard, Music for those who want to dance.

All Players, Ex-Players, Officials, Supporters, Friends and their Partners are cordially invited to attend the party for our very special Club Early Application is recommended as places are limited.

Entry is by ticket only - Final Date for Applications 30th April 2018. Click Here for an application form or contact details.

If you have any memoribilia please forward copies to Eric so that we can display on the evening. Football matches are planned during the afternoon at Redcotts with games being arranged by age/era. This is not a club fund raising event, all revenue will be used to ensure we have a great anniversary.